Meanwhile, the rest of the 424th had withdrawn some 26 or 27 miles from the area around Berg-Reuland on December 20, 1944 heading for North of Werbomont, Belgium through Commanster, Belgium. They arrived in Commanster on December 21, 1944 and Webomont by December 23, 1944. The boys in the main group of the 2nd Bn of the 424th were nearly as worn out, hungry, cold and tired as M1 and his friends (as Willie was now known among his fellow MIA colleagues).

At the same time, the German offensive known in Germany as Wacht am Rhein, was in trouble. Hitler’s plan of attack to ensure success was to make a quick, decisive break through the Allied lines followed by a lightning fast run for Antwerp seizing fuel and supplies as they went. The goal being to divide the Allied forces, cut off Allied supplies, and force better terms for Germany during a negotiated surrender. But, success depended on speed. The hard fighting of the American soldiers of the 106th ID, 28th ID, and 99th ID thinly spread across the long front line in the Ardennes held the Germans up. It was critical to the German plan to gain control of the roads and rail in the Ardennes to give them access deeper into Allied territory and onward to Antwerp. 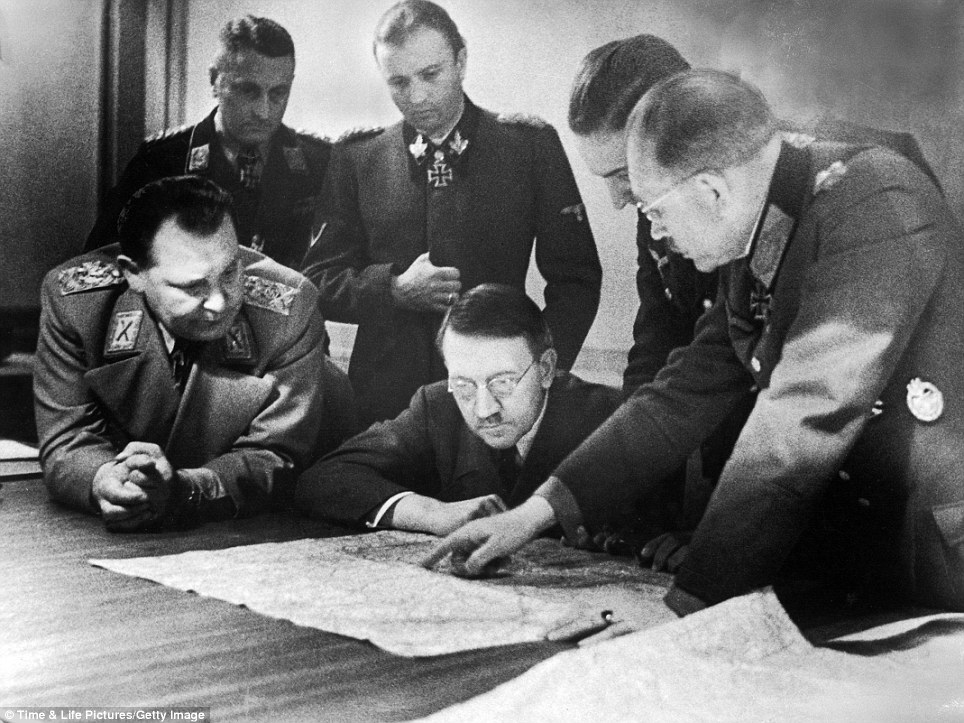 St. Vith was a crossroads town with rail access; capturing it quickly – by 4 pm on December 17, 1944 – was a high priority for the success of Wacht am Rhein. With no food, rest, supplies, help from the air, or from the reserve divisions, and short of ammunition the 422nd and 423rd Divisions held off the German advance for days. The Germans eventually broke the 422nd and 423rd Divisions on December 20,1944 capturing or killing most of young soldiers in both these divisions. Remnants of the 422nd, 423rd, parts of the 424th, and the 9th ID fell back toward St. Vith fighting hard all the way. Eventually surrounded and cut off, out of food, ammo, and medical supplies the Allies were forced to fall back leaving St. Vith to the Germans on December 21, 1944. The Allied boys of these divisions, especially the 106th ID 422nd and 423rd Divisions had hold up the German timeline by 4 whole days.

As the Allies pulled back they entrenched in a large area East of St. Vith later called the “Fortified Goose Egg”. Germans were constantly infiltrating the Goose Egg trying to find a weakness to allow them to complete their mission. The remnants of the Allied Divisions hung on preventing the Germans from driving through the Goose Egg, disrupting the German time table another 2 days until December 23, 1944. Eventually the Germans again broke through and the Allies were forced to withdraw to the town of Rencheux, Belgium where the Command Post for the 106th was now located. As the Allies pulled out and the Germans advanced, the 7th Armored Division along with the 82nd Airborn Division defended the Goose Egg allowing the Allies to withdraw.

German Soldiers in the Ardennes

German Soldiers in the Ardennes

American Soldiers in the Ardennes

The 508 Parachute Infantry Division was moved to Vielsalm/Rencheux on December 20, 1944 to defend 2 rail bridges and 1 road bridge to prevent the Germans from advancing across the River Salm at all cost. The Salm at Rencheux is only a 10-foot wide stream but it runs fast here and had cut an 8-foot deep gorge for its pathway allowing for Allied defensive positioning.

On December 22 & 23, 1944 the 508PID was guarding the bridges as a constant flow of terrified men crossed over the road bridge fleeing the Germans and the Fortified Goose Egg. It was not unusual to see groups of Infantrymen who’d thrown away all their arms to lighten the load so they could travel faster. The 508PID set explosives on the 3 bridges over the Salm with orders to blow them up between 1500 and 2200 on December 23, 1944 when the last remaining tanks of the 7th AD, acting as a screening force for the withdrawal, had safely withdrawn across the river. Any Allied soldier left behind after the tanks of the 7th AD had bypassed them and the Rencheux bridges were destroyed were going to be trapped behind German lines. The fate for any soldiers in this predicament was grim.

Darkness falls early in December. By about 1600 or 1630 on December 23, 1944, the sun had set. There were no more Allied planes flying overhead. Though M1 and the other MIA boys of the 2nd Bn had felt some hope of surviving their ordeal during the daylight hours, when darkness fell they were still lost in the Thommen Woods within the area of the Goose Egg. They of course didn’t know that the area was about to be abandoned by the Allies and if left behind they’d surely be killed or captured by the advancing German army like the boys of the 106th ID 422nd and 423rd Divisions. Bill remembered that he and the other MIA boys were constantly in danger from German snipers and troops in the Thommen Woods. In fact when a few months before Bill died, he had either a flashback or nightmare when he relived spotting and shooting a German sniper with his M1 rifle taken from Pfc Donald Schultz who’d died in the very early morning hours of December 17, 1944 in the fields over Grosskampenberg, Germany.

Carl Wouters and Doug Mitchell of the 106th ID Association European Chapter believe M1 and his buddies were likely found by the 7th AD as the tanks retreated from the area between Grufflingen and Maspelt on a road that abuts the Thommen Woods about 12 miles from Rencheux. Bill’s recollection was that they’d been found and rescued by the “3rd Army”. This was part of Patton’s army, which had not yet arrived in the area, so his recollection could not be accurate. The only other Armored Division in the area was the 9th AD. The 9th AD was patrolling the area of the Thommen Wood from 0001 to 0400 on December 23, 1944, but was pulled out of the area at 0530 to head out toward Manhay, Belgium. The 9th AD was no longer in the area after sunset. 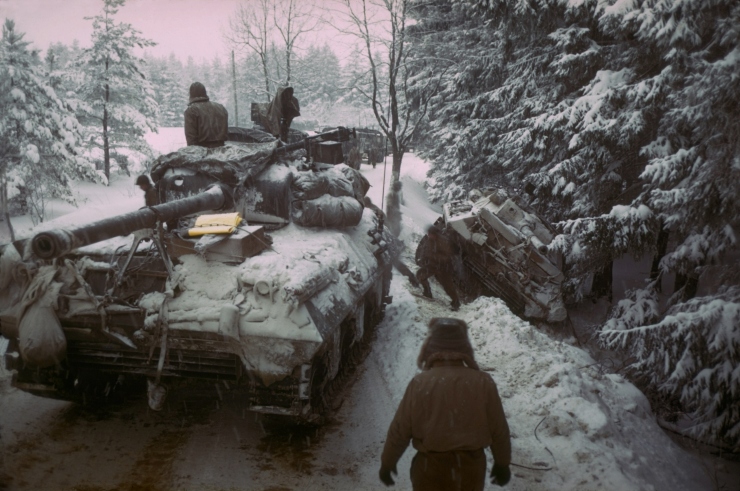 Bill later recalled that the men in the tank company were stunned to find them, shocked to learn they’d been MIA with only one rifle between them, and astounded no one had been killed or captured by Germans while they were stumbling around the woods. They loaded M1 and the boys onto the outside of the tank, hanging on where ever they could find a handhold, and ran fast for the Rencheux Bridge to put the Salm River between them and the advancing Germans.

We will never know what time the tank company found M1 and the others, but we know it was after 1630 when darkness falls. There is also no way now to know how long the trip to relative safety in Rencheux took the 7th AD tank while watching out for German forces and making sure that the infantrymen were all withdrawing ahead of the tanks. 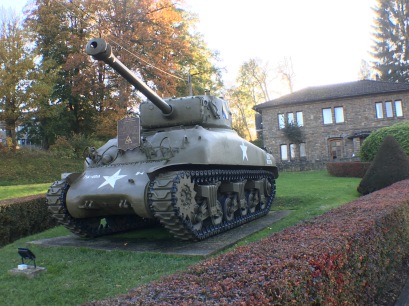 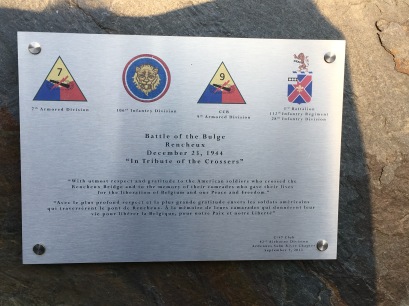 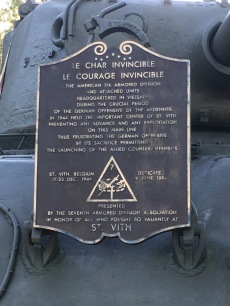 We can confirm that back in Rencheux, the 508PIR had already blown up one of the two rail bridges at 1500. The 2 remaining Renchux bridges came under fire at 2200 from an entire German advance platoon along with enemy tanks and machine guns. The 508PIR desperately tried to blow the bridges to prevent the German army from crossing the narrow Salm. The 508PID managed, under fire by the Germans, to blow the 2nd rail bridge. The last remaining road bridge was finally blown up, after two tries, when soldiers dashed to the center of the bridge under cover fire to place a round of C-2 in the center. A bazooka round was fired into the C-2, successfully destroying the bridge. The final 2 bridges were blown up sometime between 2200 and 2400.

A bridge in Germany being blown up 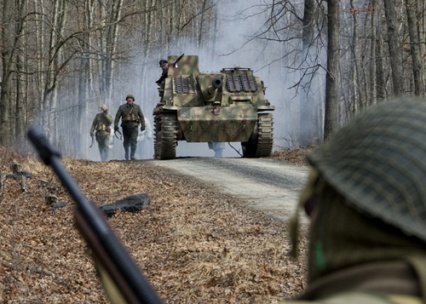 Allowing for the rescue tank to make the 12 mile trip back to Rencheux while holding off the advancing Germans, Carl and Doug suppose the tank carrying M1 and the boys may have been among the last to withdraw across one of the last two Rencheux bridges before the German advance platoon showed up at 2200 and the 508PIR was forced to blow them up.

Arriving in Rencheux, M1 and the boys were probably taken to the 106th ID Command Post located there. Bill remembered in later years they were all debriefed before they were fed, rested, or treated for their injuries. Eventually all had been questioned and open trucks were called to take them to a triage station for treatment. By now it was likely the early morning hours of Christmas Eve, December 23, 1944.

Bill recalled the Tank Crew and the 106th Command Post soldiers stood at attention, saluting while the boys were loaded into the trucks and driven away. This indicates the respect for the boys’ strength and fortune that all managed to survive the conditions and the infiltrating Germans within the Fortified Goose Egg for 3 full days and nights with only one rifle, no food, and no winter gear for 3 very long days and nights with no sleep.

Next M1 and the boys received showers, food, triage for their injuries, and sleep. They probably slept through Christmas Eve and Christmas Day, 1944. Military records indicate M1 was admitted to a hospital in Liege on December 26, 1944. Bill recalled the long cold ride in an open truck from the triage station the 40 miles to Liege years later.

Eventually M1 returned to G Co but for the rest of the War he never saw any of the other boys he’d spent those harrowing days with among the ranks of the 2nd Battalion.